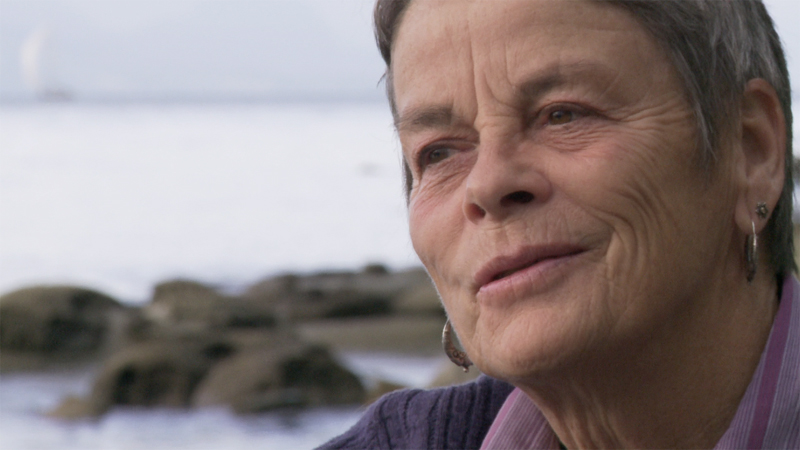 Setting up to interview Su Russell and David Baker on the edge of Pilot Bay, Gabriola Island, with DOP Kate Bradford and Producer Tobi Elliott. (photo by Tony Grove)

You couldn’t have asked for a better interview setting, or a better interview. After a full day of filming two of our main characters for the documentary ‘Between Wood and Water’, all the stars seemed to align to allow us to finish with an absolutely lovely interview – both in the dialogue captured and the setting’s serene aesthetics that matched our subject’s mood and conversation. It was a 1-2 combo of the rare variety that makes a filmmaker’s heart sing!

The day of our shoot dawned with a promising overcast sky (harsh sunlight being unkind to our subjects) and Kate Bradford and I got over to Tony Grove’s shop to set up before David Baker and Su Russell arrived. As soon as they pulled up, it was all I could do to stop Tony and David diving immediately into earnest discussion. By now, Tony knows the shooting routine well enough to divert the conversation before he hears my anguished cry, “Wait, wait! you can’t talk about anything IMPORTANT until we’re rolling!” so he and David strove mightily to talk about anything but what concerned them both the most: Dorothy‘s condition. (I think they hosted the inaugural meeting of the Dodge Van Fan Society – each possessing one of those illustrious vehicles.)

Although we had decided to get to know one another a bit before turning on the cameras, it was obvious the couple couldn’t wait to see their beloved sloop, so we plunged straight into it and attempted to capture what this vessel had meant – and still meant – to them.

During the morning-long shoot, we followed David and Su as they sat in the cockpit and then the cabin, mulling over memories and comparing notes on changes in their beloved Dorothy. They both seemed to be lost in time as they stroked the tiller and siderails, hands falling automatically into position, and stood comfortably in familiar places, reminiscing over how powerful body memory can be.

Dorothy had been part of their lives from 1984-1991. As a young, blended family growing up in Victoria, B.C. with the aim of family adventure on the water, the Baker-Russells piled into their shapely vessel nearly every weekend (up to 6 bodies!) and explored the Gulf islands of coastal B.C. Like her original owner, W.H. Langley, David and Su took full advantage of Dorothy‘s incredible sailing and cruising abilities– in part because she was in peak condition by the time they owned her, and in part because the Baker-Russells simply love to be on the water. They didn’t miss an opportunity to sail this historic boat.

Following lunch (and lunch at Tony’s is not something to be missed!) we had a more leisurely shoot over some photos and personal memories. Then came an opportunity to indulge Tony and David at last in a true “man-chat” and dive into the particulars of her restoration. David and Su were the 3rd set of owners to continue a legacy of careful restoration begun by Chuck Charlesworth in the 1950s, after Dorothy was essentially abandoned by a series of owners (post-Langley) who didn’t properly care for her. Under their watch, she was brought to pristine condition, and the list of modifications and rebuilds that David and Su undertook is staggering (those interested can read the complete list of modifications and upgrades at the end of this post).

David had essentially re-rerigged her, learning traditional steel wire splicing, parcelling and serving in order to get the standing rigging done authentically. They replaced all of the running rigging, re-built the mast and boom, had a new fore hatch built, added winches for safety and sailing efficiency, and had Bent Jesperson make a new rudder and tiller. As a physician and academic, David’s attention to detail ensured that everything that could have been done to maintain Dorothy was duly accomplished, and she shone as the “oldest classic boat” at Expo ’86. Tony suggested that if David, (and Angus Matthews and Chuck before him) hadn’t taken such diligent care of Dorothy, she wouldn’t be around today. Wooden boats, as you no doubt know by now, need a lot of care and attention.

As we surveyed the vessel that was once his pride and joy from keelbolt to tiller, David spoke movingly about how much he had enjoyed working on this boat of incomparable pedigree and such beautiful lines. Out of everything David said had to say about Dorothy, what impressed me most is that he really understands the purpose of sailboat design, and where boats can fall down on their merits. During our interview, I learned that a sailboat can be built to race well, or to cruise well, or to look pretty, but rarely do they combine form and function and do all those things well. And Dorothy, needless to say, does.

David and Su are a very special couple who still love the water. It’s obvious that Dorothy as a wooden boat has left an indelible impression on them, because their next boat was the gorgeous 40-foot Rhodes 27 sloop, Varya, built in 1940 and extensively rebuilt and upgraded by David. (See images on their website here)

And then, the icing on the cake at then end of a successful day: as the sun’s shadows stretched and stretched across the lovely, quiet bay on Gabriola island on Solstice eve, the water lapped quietly at our feet as Su and David  spoke movingly about how much Dorothy had meant to them. The setting was so magical and their words so perfectly evoked the emotions of what Dorothy meant to them, and should represent, as a historical living vessel, to the rest of B.C. – and indeed all of Canada – that I will save what was said during that special interview for the film. I’m sure much of that interview will make the final cut.

On a personal note: aside from the moment I first discovered Dorothy behind Tony Grove’s shop on Gabriola island back in October 2012, and got that shiver of excitement that means you’ve found a really great story, this day has been my personal favourite in the story so far. It confirms my belief that Dorothy is indeed a special, lucky little sailboat who has an amazing ability to draw the most wonderful people to her.

And perhaps it’s the other way around, too. Maybe those who connect with Dorothy are bettered by their love of her, and left changed and somehow beautified as a result. In any case, everyone that I’ve met who has had anything to do with that lovely boat has been instantly a heart-connection. I’m left very thankful that we have the opportunity to tell this story, and as the details line up and the stars shine down on us, it confirms to me that this is indeed a story for our time.

May all kinds of Dorothy-inspired adventures continue…

List of Improvements and Rebuilds for Dorothy under David and Su