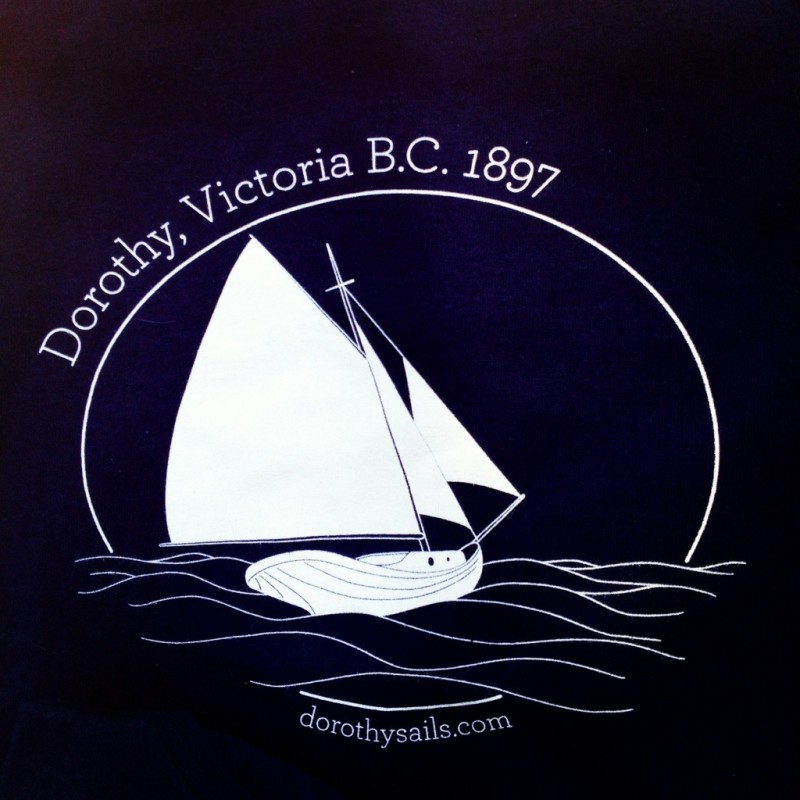 This beautifully designed, simple and elegant image of Dorothy has made its way onto T-shirts at last, and they are being snapped up by everyone who loves this beautiful boat. What do you think?

I’m super excited and deeply grateful that so many people helped out with this first step in our campaign for production funding. Tony Grove, the restoration specialist working on Dorothy, is also a marine artist. He created an original illustration of Dorothy at sail that captures her gorgeous fantail (more of his distinctive artwork here: http://www.tonygrove.com/artwork/photo-gallery.php) Many thanks to Bryan McCrae of Filament Communications who rendered the image and added text, and Senini Graphics in Nanaimo who gave us a great rate and professionally silkscreened the tees. Our new Tee-shirts have arrived! July 2013

There are about 20 women’s tees (soft, Gildan cotton V-necks), and 20 men’s (Gildan cotton crew necks) remaining, both in Navy. The suggested donation is $25, all of which goes directly to production costs for filming the documentary, Between Wood and Water, this summer and fall. For more info and shipping costs to a mailbox near you, email Tobi at dorothysails@gmail.com. We’ll be happy to send you one!

We are also pleased to announce that in mid-August we’ll be launching a brand-new, exciting campaign on Indiegogo – the world’s largest “crowd-sourcing” community for creative endeavours. Donations from ordinary people like you, in small and large amounts, will generate the support critical in the making of this documentary. Please encourage your friends, family, community, and everyone who loves boats and maritime history, to sign up on our website so we can update you on where the production is at: dorothysails.com

For the Indiegogo campaign, we are partnering with From the Heart Productions in California, a great company with an awesome track record of funding and supporting independent films, which gives us a fiscal sponsor in the U.S. That means donations from the U.S. get their donors a tax write-off. Bonus!

More than that, FTH President Carole Dean, who quite literally wrote the book on funding indie films, has been an invaluable mentor and asset in helping us reach our goal and get this documentary produced. More info on the campaign to follow, but for now, I encourage you to browse Indiegogo and check out the cool projects from around the world. There is so much creativity and heart out there!

Dorothy and her entourage are jumping aboard…

David Baker in a Dorothy tee, hanging outside the Village at Gabriola. June 2013. dorothysails.com

Our new Tee-shirts have arrived! July 2013

Designed by Tony Grove, laid our by Bryan McCrae. July 2013