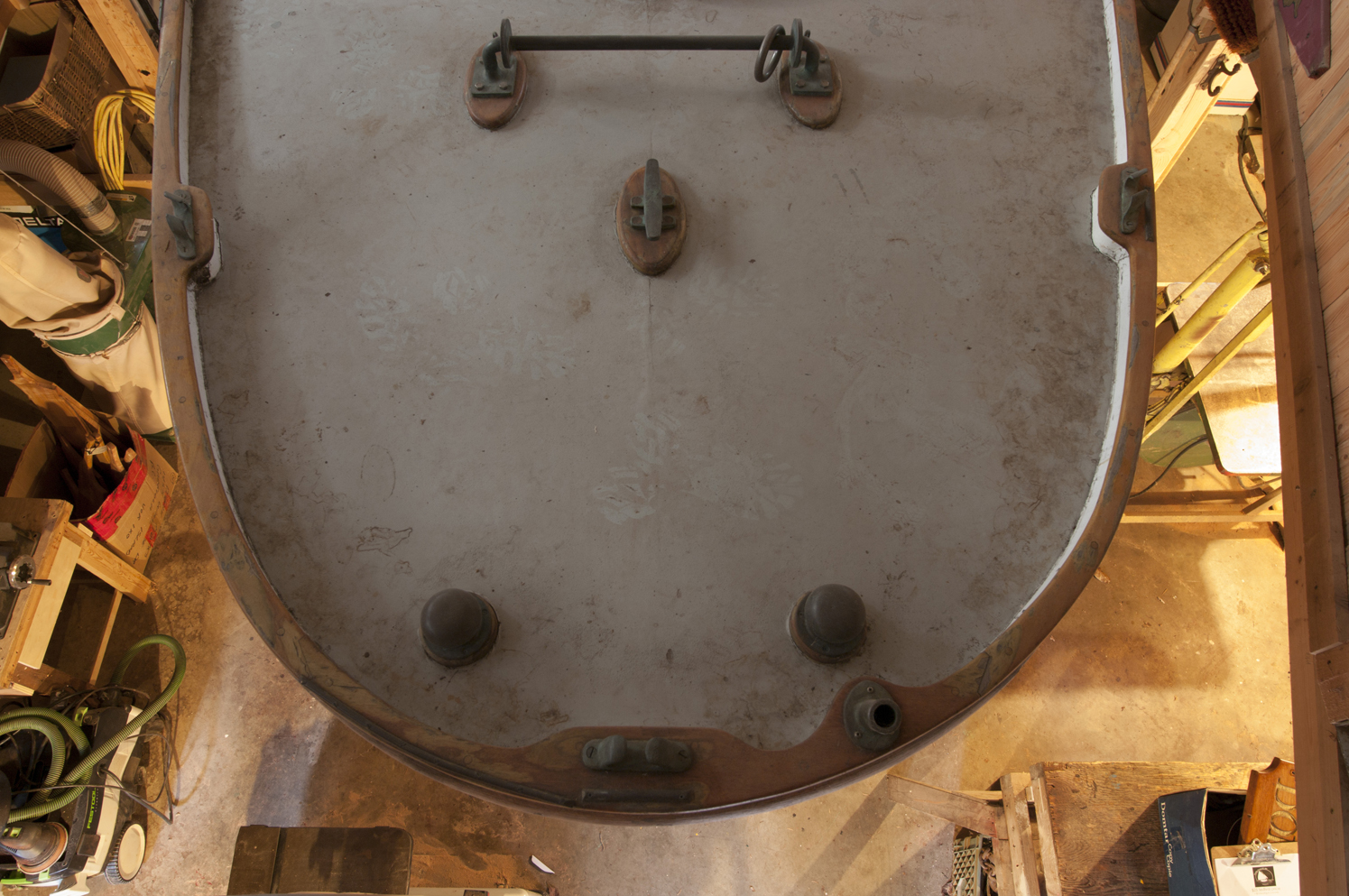 Dorothy through your eyes

Dorothy is not only a fast-sailing little yacht, she also happens to be very pretty boat with a striking design, both structurally and sculpturally beautiful. Many of you have said in interviews about Dorothy that they believe her beauty is part of the reason she has survived so long.

So Tony and I have not been entirely surprised by the number of photographers passing through these shop doors over the past year – both professional and amateur – eager to capture the essence of Dorothy. Most of them start by walking around her in slight awe, eyes alight as they slowly pull out their cameras and begin to frame some of the hundreds of images that have by now been taken of her.

Dorothy is the ultimate photography subject – both for boat aficionados, and for those who simply love beautiful shapes. Even though her insides are bared, and the light around her ranges from soft daylight from the upper windows of Tony’s shop, to harsh fluorescents to neutral spotlights, she takes it all in with grace.

The challenge of “shooting Dorothy” lies not so much in which angle to capture, but which image best expresses her. Is it her magnificent, 6-foot fan-tailed stern, as Calgary-based photographer Byron Robb captured in the image at the top of this post?

Or her slender bow with sanded cedar planks on display, as noted Gabriola photographer John Poirier captured below?

Or is it the grain and wear of her old-growth Pacific forest timbers, which captivated David Andrews?

Another Gabriolan photographer, Bill Pope, stunned us with his generous series of HDR photographs, which can be seen on his Flickr set “Dorothy restoration”. There are too many images to post here so I encourage you to take a look. Here are two of my favourites:

Some of the very best photographs from our visiting artists will be on display at Victoria’s 37th Classic Boat Festival, which runs next weekend, August 29th through the 31st. A few images that were donated by the artist will be available for purchase at the silent auction on Friday night, proceeds from which go toward the Maritime Museum of B.C. (which is undertaking Dorothy’s restoration).

In other news, what has been holding up Dorothy‘s restoration? Well, as most of you likely know by now know, the MMBC had decided last spring not to re-launch Dorothy this year as originally planned. They are dedicated to doing the job right – which necessitates raising more money than they have right now, which is only enough to make her structurally sound – by having her topsides and cabin restored as well.

They are also coming up with a strategic plan as to what should be done with Dorothy once she’s back in the water. It will require more than simply moorage at a location where she can be seen and appreciated to advantage. She will also need a team of dedicated volunteers who know and understand the care required of wooden boats, and people who will take her out sailing!

So if you are interested in speaking to someone about the legacy fund for Dorothy’s continued care and restoration, or to be numbered on the team of volunteers as a “Friend of Dorothy”, please contact either John West (director and trustee for the MMBC) at john <at> johnwest <dot> ca or Angus Matthews (former owner) at angus <at> angusmatthews <dot> com.

Tony Grove has not been idle when not working on Dorothy. He recently completed a lovely 15-foot Passagemaker “take-apart” sailing dinghy for a client, from Chesapeake Light Craft plans. He left just yesterday for the Vancouver Wooden Boat Festival in Aja, his newly acquired strip-plank 34-foot Atkins schooner, towing the brand new little sailboat. They made it safely across, and both Aja and the Passagemaker will be in the festival.

So, here’s to festivals and photographers, beautiful wooden boats, and to all with eyes for lovely lines and beautiful shapes!

We look forward to seeing you at the Festival next weekend.