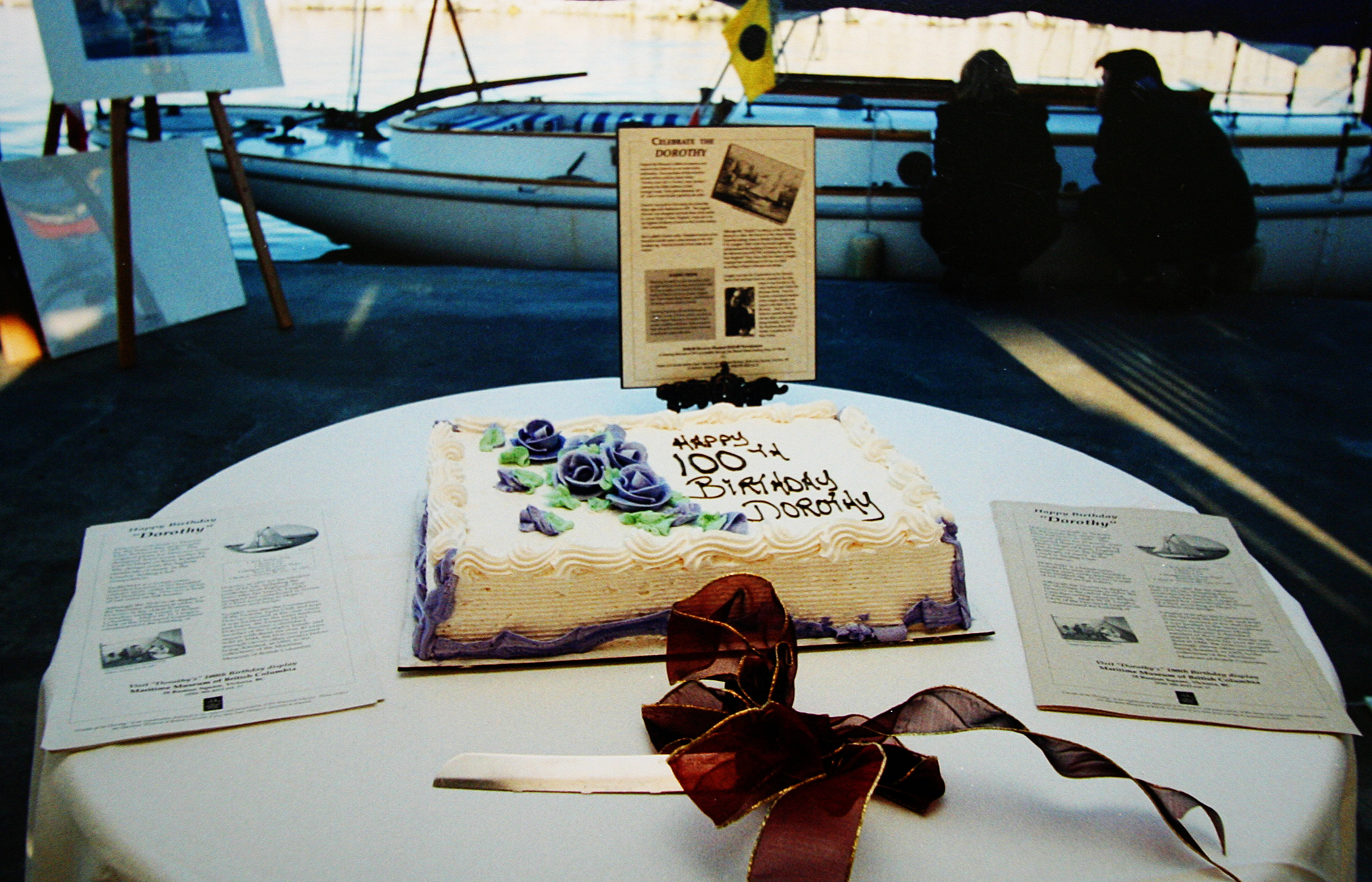 Our gal is 119 years, and counting

In about one month, it will be 119 years since Dorothy was launched into Victoria’s harbour waters for the first time, July 26, 1897. The news made the papers, of course:

Imagine the scene: with one month to go, her owner, barrister William H. Langley, was doubtless doing what every owner would be doing right before a beloved boat is about to launch – frantically buying everything needed to outfit his little yacht. How do we know this? Because Langley saved every receipt for every single purchase he made for Dorothy, perhaps knowing his boat was something special. (Or maybe because he had O.C.D.)

As meticulous Langley was in preparing his boat for the water, he was still obsessed with sailing, and was racing his first yacht, Viola. Viola wasn’t fast enough for Langley though – he wanted a winning yacht. So he bought a design from Linton Hope, himself a successful Olympic yachtsman and the owner of the Thames Yacht Company in England. Langley intended to name his next racing yacht “Viola II”, but when he acquired the plans from Hope, they were named “Dorothy”, so he stuck with that.

Evidently, she was fast. The stories of her successful races and regattas up and down the Northwest coast, I’ll save for another post. Below is a picture from Dorothy‘s 100th birthday celebration, in 1997.

And now, the hard news…

You may remember that our last post over a year ago lamented the tragic situation of the Maritime Museum of British Columbia. News broke in the community that the government had condemned the historic building that the Museum had occupied for 49 years, and they were forced to find a new home. The hope was that they could get a lease for the CPR Steamship Terminal building, unoccupied and in a central, waterfront location, but it was not to be.

(A full backgrounder of the MMBC tenancy timeline is here for anyone interested in the history: http://mmbc.bc.ca/flymetothemoon/wp-content/uploads/2010/07/MMBC-Tenancy-Time-Line-and-Backgrounder-FINAL.pdf)

Packing up, moving everything into storage, and archiving the four floors of displays was painful. The staff was whittled down to three, then two, plus volunteers. Locations had to be secured for the large artefacts, of which there were many, including two entire boats, the Tilikum and Trekka. Over 40,000 items had to be cleaned, examined, meticulously catalogued, wrapped and packed away. The task was enormous, but the staff and volunteers heroically went at it for 6 months straight. I’ll just share some photos of the time, which say more than I can put into words:

It was devastating for many of the countless volunteers, maritime experts and lovers of historical research to see practically all of the collections packed up and stored away. The unknown loomed: where would they be housed? How could they organize and store such a huge collection? Would anything be available to the public again? Was maritime history doomed to be relegated to a back alley storefront, a shelf in a library?

And now, the happy news:

Thankfully, the history of an entire province’s coastline is bigger than any single location, and, true to form, maritime history seems to have survived. Incredible as it seems, the forced move seems to have breathed new life into the organization, which had long struggled with the aging building and other issues.

A new board, staff, website and vision have been birthed from the ashes, and in May 2016, they opened the doors to the Society’s modest location in Nootka Court, with a selection of the collection’s very best on display, featuring an interactive journey into the Franklin Discovery, the Captains Cook and Vancouver Journals, as well as many original works by marine artist John Horton featuring the “HMS Discovery”. Check out their featured exhibits here: http://mmbc.bc.ca/exhibits/featured-exhibits-2 We salute you in your new start!

Also, because of the move, we finally found Dorothy‘s suit of sails! They were made in the 80s by Fogh sails, commissioned by her owner at the time, Angus Matthews. Here’s Tony Grove hanging on tight to the valuable find:

Dorothy‘s fate has always been tied to the people who care for her. She has survived longer than any other yacht in Canadian history because she was loved, appreciated and restored again and again.

And now it appears that those at the Museum who have so enthusiastically revived the institution itself are embracing the chance to influence Dorothy‘s future as well. Tony Grove (who is charged with Dorothy‘s restoration for the MMBC) and I have been talking with new leaders and shapers at the MMBC, and we are extremely heartened by their avid interest and desire to make this little yacht’s story central to the province’s maritime future.

There will huge news forthcoming as talks deepen and as we prepare for Dorothy’s 120th anniversary next year! Look for another significant update in one month’s time.

There is so much to look forward to, and we thank you for joining us on this exciting journey.

All the best, now get out there and get sailing! Tobi & Tony