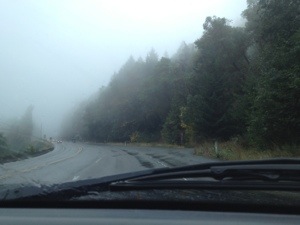 Off to see the Boats… the beautiful, beautiful boats!

So we’re on our way!! (Left: Kate Bradford, our director of photography, in a rare moment in front of the camera)

We’re off to the Classic boat festival this long weekend with a truck full of gear (see right- the exposed blimp and box of tee-shirts? this is how movies are made…) to capture some magical boat shots and interviews with people CRAZY about wooden boats. This is the first shoot that isn’t totally Dorothy-focussed, and I think it’ll be nice to get some light touches and atmospheric colour for the film. Not everything has to be about Dorothy – does it?

If this afternoon’s brief time with Angus and Sandy Matthews is any indication, we’re in for a fantastic shoot. They were marvelous! I was so captivated by the conversation that I didn’t even remember to pull out my camera for a photo, so we’ll have to get them another time (they are very photogenic, by the way… )

Owners of Dorothy in the 70s until 1984, they actively sailed her as a young family and did much to keep her alive. Angus confessed a secret about what he did for Dorothy while she was under his care – which Tony Grove said did much to keep her in good condition – which we have sworn not to reveal. But something we can tell you… It was Angus who provided Dorothy with the gift of a full suit of Fogh sails, which are waiting for her return to the water even now (thanks to his brother, an Olympic sailor who worked for Fogh.) We learned during our time with them this afternoon that it was apparently the first suit of gaff-rigged sails Fogue had ever done!

Then, the photos came out. Oh my, there are some beautiful shots of Dorothy under sail like I’ve never seen before! They will for sure make the film. Can’t put them up yet as we left in such haste for the ferry that they will have to wait until after Victoria and Port Townsend boat shows.

I’m personally so stoked to meet the many people who have written us or talked about hearing the Dorothy and are looking forward to the film. And we have some amazing volunteers who stepped forward to help us sell T-shirts (which fly out of the box whenever they come out) and enlist people in our doc film community – thank you especially to Harry Martin, a volunteer for the MMBC who has come over to see Dorothy a number of times and already has done so much for us in organizing help and volunteers. Thank you Harry!

Thank you everyone who has stepped forward to help, or even give encouragement that they are eager to see the film. THIS is how films are made… as a team, for a community, with passion and diligence and no small amount of sweat and persistence. So thank you again. We can’t do this without you.

And now, if you want a moment of levity, go to the Dorothy Documentary Indiegogo Kickoff party event on Facebook and look up the ridiculous video I posted yesterday to reveal the party location! It’s going to be an amazing event, full of artists who are donating beautiful work for the fundraiser, tapas by some incredible local chefs, music and dancing and oysters and Dark n’ Stormys, oh my! Please join, even if you can’t come personally, join virtually! Sign in and you can see my new video pitch for the film, get some photos of the action and download the dance mix curated by Bryan. It’s going to be a blast, so come if you can!

More to come from the amazing festival grounds, for now, off to the Sticky Wicket to meet our team and plan out the weekend…